I was in a cake baking mood. Also in a coconut rum mood. Those who know me know I am a lightweight when it comes to drinking. I may have a mixed drink once a month sometimes not that often. Tonight was Captain Morgan coconut rum night. So we have cake baking and coconut rum. What not combine both?

Searching Pinterest I found several recipes I liked but they were so involved. I was in the mood to bake but I had just got home from work so I didn’t want to spend a whole lot of time in the kitchen. Gotha needs to rest sometime.

So I just found a basic white cake recipe and used the rum in place of the liquid. I had a small dilemma during the mixing of the cake. I had only a small amount of rum. If I use all for the cake I wouldn’t have any to drink later. After a whole two seconds of deliberations I used half the rum along with milk in the cake. To give the cake a strong coconut taste I added two tablespoons of coconut bakery emulsion. FYI: I’m drinking the rest of the rum now. Public Service Announcement: Friends don’t let friends drink and blog.

While the cakes are baking it’s time to toast some coconut. Here is where I give short but sweet instructions to toast coconut. That went by so quickly I had time to find some spooky pins I plan to try out soon.

Cakes are out of the oven and cooling. I planned on making the frosting from a recipe I found on Pinterest. Uh…nope not happening. I am a lightweight drinker. I had just enough to give me a tiny buzz now I’m just sleepy. So, Betty Crocker to the rescue. I just happened to have a can of white fluffy and a can of milk chocolate frosting. I mixed some coconut emulsion into the white fluffy. That went on the tiny cake. It was going to go on the big cake also but once I saw that can of milk chocolate frosting all I could think about was Almond Joy. Holy toasted coconut Batman! That was a good cake. The white frosted cake was okay but much better the next day after the emulsion had time to mingle with the frosting.

Here is the basic white cake recipe. Maybe one day I will try that frosting I planned to use.

The tiny cake photos turned out okay but once it was time to snap some shots of the chocolate coconut cake I was so tired. I snapped a few shots. I don’t think you can tell in the photos but I didn’t even frost the whole thing. Also the hubby was in such a hurry to try a piece he was standing over me with a knife. He had been waiting all day to eat cake by then his patience was wearing thin. I’m going with the theory the knife was for the cake and not me. Now if I would have taken more pictures making him wait longer who knows, that knife may have been used to get me out of the way. The hubby loves cake. 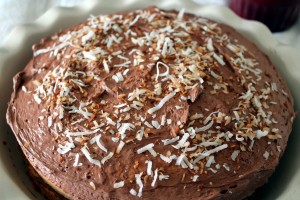 Another Pinteresting day in the life of Gotha Stewart ended with a belly full of cake hubby and me taking my lightweight drinking self to bed.

This will be short and sweet. Today I toasted coconut successfully for the first time. There was one attempt in the past that did not work out well. I blame Tim Burton and Jack Skellington for that disaster. I tried the oven method of toasting coconut. I put the coconut in the oven and from the living room I hear Jack singing while visiting Christmas Town. I had to go sing along with him. Who knew you had to stand watch over the coconut because it could burn quickly? I didn’t know. Billowing smoke from the kitchen alerted me to the disaster.

Five years later I’m ready to try my hand at toasting coconut again. This time with the stove top method with no television on. Saw this on Pinterest. It was so damn easy and was over in no time. I needed the coconut for a rum cake which I will share in the next few days.

Toasting Your Coconuts
In a dry pan on medium heat. Toss in your sweetened coconut flakes. It will take a few minutes before the toasting to begin. Once it does, keep stirring and don’t walk away because things happen pretty fast. Wham bam before you know it your coconuts are toasted. Now throw them tasty things on some wax or parchment paper to cool.

Here is the toasted coconut pin.

Cooling down on wax paper

Thanks for stopping by to join me here at The Pinteresting Life of Gotha Stewart.

Follow The Pinteresting Life of Gotha Stewart on WordPress.com
Join 2,387 other subscribers