I love me some cinnamon. I am still enjoying the cinnamon toothpicks I made. I was gathering supplies to make a small batch of lip balm and was thinking about those cinnamon toothpicks. Suddenly an idea hit me, thankfully not hard, but it did hit me. The idea? Cinnamon lip balm. I read several pins on making lip balm and from them I came up with the recipe down below.

Let me tell you something about cinnamon lip balm…it is not for the faint of heart.

In a pot add a few inches of water, turn burner on low. Give the water a few minutes to heat up. Using either a glass jar or some other container that can take the heat, place the jar in the warm water. Into your jar add the beeswax, Shea butter, Sweet Almond oil and Argan Oil.
Let everything melt, stirring with a wooden spoon. Once melted add your lipstick chunk if you are tinting. If not remove from heat, add your cinnamon, stir then pour into your storage container. 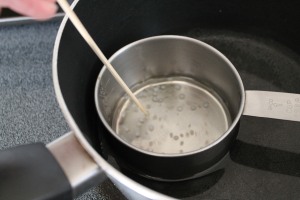 Wax and oils melted together.

This is my first time dealing with beeswax. What I learned from this first time is that the stuff wants to set up FAST. So have your storage container handy so you can pour quickly.

I should have added a bigger chunk of lipstick. I had a bronze color which using just a little made my balm look dirty. I meant to pour just three drops of cinnamon oil but a tad more came out of the bottle. I let my balm set, which didn’t take long. It smelled like cinnamon heaven. I put it on my lips and it burnt like hell. My lips were on FIRE. Grabbing a rag I wiped what I could of the balm off my lips. Still the fire was raging. I made a mad dash to my freezer, grabbed a cube of ice and tried to cool down my burning lips. It took a few minutes but my lips cooled down. On a positive note my lips were nice and soft. Was it from the oils in the balm or did the dry rough skin burn off? I don’t know and I’m not going to try it again. Hell who am I kidding? It’s cinnamon, of course I’m going to try it again.

This was a very Pinteresting and painful adventure. Do you have a favorite lip balm recipe? Please share.

Follow The Pinteresting Life of Gotha Stewart on WordPress.com