I thought I would start this out with a funny story before getting to my recent Pin recreation. Turns out the Pin I attempted ended up being the funny story.

If my dad is at the store and bananas are on sale he will buy them. Not for himself, but for me and the hubby. So every few days dad is popping over with a bag of bananas. A WHOLE bag. So today I have twelve over ripe bananas needing to be used. Two loaves of banana bread later I still have a boat load of bananas left. So Pinteresting I went.

I found Lazy Morning Banana Cake after a quick search for banana recipes.

Simple, easy to follow directions. Where did this go wrong? Or did any of it ever go right?

I had all the ingredients. Thought I understood the recipe and instructions. Problem number one: I could not find my measuring spoons. So I guess-a-mated. Problem number two: was I suppose to use all purpose or self rising flour? I only had self rising available. I had a fifty percent chance of using the right flour. Problem number three: I poured the batter into the pan. To me it seemed like way to much for one round pan. But the recipe used one. I trusted the recipe. Problem number four: I forgot to add the butter to the batter. The cake was already in the oven by then so I was committed at this point. Or should have been committed.

Thankfully I put a pan on the bottom rack just below the cake in case there was too much batter. I will let the photo tell some of the story. 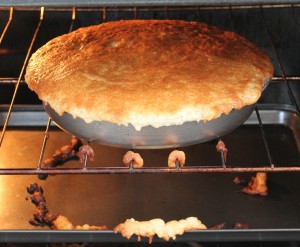 The bake time was suppose to be twenty-five minutes. TWO sets of twenty-five minutes later and the cake still wasn’t done. Skelly was sitting at the table with his mouth hanging open. I believe that bony fellow was laughing at me. I was not in a laughing mood. There was also another pin going wrong during this time. Maybe I would see the humor in all of this later. Much later.

On a positive note the baking cake was smelling pretty damn awesome. So after seventy minutes bake time I took the cake from the oven. Was it done inside? I didn’t care at this point because the top was beginning to burn. After letting the cake sit a few minutes I worked up enough nerve to perform the fork test. Woohoo ! The fork came out clean. The cake was done. Finally. As you can tell by the photo that cake was not going to come out of the pan without a fight. The battle was epic. Ballads will one day be sung about this battle. In the end the cake did come out of the pan (not in one piece) and all that awaited was the taste test. I let the husband try it first. With some urging from him I finally took a bite. Oh my goodness. This disaster of a baking experience resulted in the best tasting banana cake EVER. Would I bake it again? Hell no! I’m still trying to get that damn pan clean. By the way I do realize my mistake now. I should not have used the baking soda with self rising flour. Okay that wasn’t my only mistake but it was where everything began to go wrong. 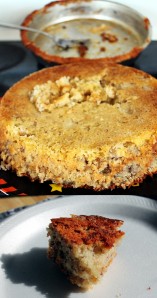 But you should give it a go. Just use a measuring spoon, maybe all purpose flour and divide the batter into two pans. Oh and don’t forget the butter. Let me know how it turns out. As I’m sitting here trying to decide how to finish off the bananas I still have left I see my dad walking to the door. Guess what he has a bag of?

Mash up the bananas.

Mix everything but the bananas. After mixing fold in the bananas. Pour into pan (or pans if you screw up the batter like I did) Bake for twenty-five minutes. Done when you can insert a fork and it pulls out clean. Good luck and may the cake gods show mercy upon you.

Thanks for joining me on another Pinteresting adventure. Here is a photo of the Banana Bread. I will share the recipe soon. 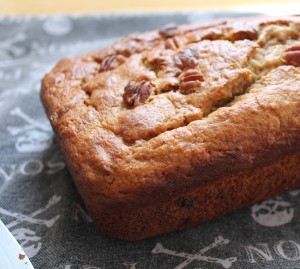 4 thoughts on “These Bananas are Driving Me Bananas!”

Follow The Pinteresting Life of Gotha Stewart on WordPress.com