Today I’m home sick with some tummy troubles. So I thought…why not blog about two recipes I discovered on Pinterest?

I tried these during the holidays. Several people in my family have a dessert they are known for, a dessert that is a must have at every get together. I decided this holiday I would find ‘my’ dessert. I began my search in October, I knew my dessert was going to be a cake and must be chocolate. So on Pinterest I went, I figured I would spend a few minutes find my dessert and BAM! The rest of my day would be free doing Halloweenie things.

Several hours later (no joke) I’m still on Pinterest. I did find my dessert in a matter of minutes but it’s Pinterest…once you start browsing you just can’t stop. I had to make myself sign off than spent the rest of the evening working on my Halloween costume and props. (One of the props I made will be in another blog soon).
During my Pinterest session not only did I find the cake I would bake but I also found something I would make for holiday candy gifts. My cake…SNICKERS! It looked so good and the recipe looked doable. The candy was double dipped marshmallows. Dipped in caramel than dipped in chocolate. (I have this marshmallow addiction, it will probably kill me one day but I’m good with that.)

So the cake adventure:
Got the recipe, read the blog linked to it thoroughly. Bought all the ingredients to make two cakes. One for testing the other for a work dinner. I had not committed to the cake for work yet just in case things went south during the first try.

A Saturday in October. I would bake and decorate the yard for Halloween. House decorations were covered, as you know my Halloween decorations stay up in my house year round. Making the cake took all day, mainly waiting for it to set up in fridge, mix frosting, frost, decorate and set up in fridge once again. But ohh the wait was worth it…happiness filled my old black heart at that first taste. It was a hit at work and at the family gathering that holiday season. I’m proud to report that the cake is now THE CAKE. It has been requested I make it for every gathering for the rest of my life.

Things I changed in the recipe: I did not use the chocolate chips and I lessened the amount of peanuts and snickers. I’m not a huge fan of the peanut. The recipe called for 2 cups of whipping cream but after measuring that out there was a little left in the carton, so I used it also. I’m a wild one like that.

Word of advice use a disposable pan. This is a messy cake and clean up is just easier if you can toss the pan when all is eaten.

Here are the pics: 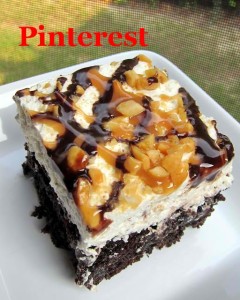 Here is the original link: http://www.plainchicken.com/2012/05/snickers-cake.html If you make this cake be sure to stop by and tell Plainchicken how awesome her recipe is!

Okay now the candy adventure…first in my defense when I saw it on Pinterest it was just a picture. No link was attached. But hell it was marshmallow dipped in caramel than dipped in chocolate, how hard could that be? That was my first mistake.
I could tell wax paper was used and also a lollipop stick. So I gathered all the items I would need. Melted my caramel. My first issue was the stick would not stay in the marshmallow and allow me to dip. So I had to hold the marshmallow by itself to dip in caramel. No biggie, I dipped put in on the wax paper, stuck in stick and waited for the caramel to harden, (a little warning, caramel is a messy creature it was all over my skeleton apron and somehow ended up in my hair.) Second issue, the caramel stuck to the wax paper! I peeled it off the best I could, one marshmallow I was able to pick off all the wax paper but the rest…no. They died a horrible death…later that evening. I still needed them for photo evidence.
I melted the chocolate and since the marshmallows were stuck to the paper I just drizzled the chocolate over them. I was able to dip the one but it did not survive long enough for pictures. I ate that bad boy as soon as the chocolate set. Trust me I earned that little treat.
The last mistake I made was the pictures, I choose one marshmallow as my focal point. I was snapping away only checking to see if the pictures were blurred. Later as I was looking at the photos on my laptop I noticed it. The one I chose as my focal…the chocolate had dripped in such a way that once it set it looked like a …..wait for it….it looked like a penis. Yes and here is the picture to prove it. I wish I could tell you I was ashamed at my chocolate penis marshmallow but I wasn’t. I giggled and made the husband look at it. 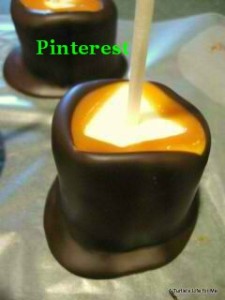 Later I searched Pinterest until I found the pin that contained the link. What did I learn from it? The lady clearly said the caramel would stick so bad that she just abandoned the caramel all together and just dipped in chocolate.

So we have one good cake recipe one bad marshmallow experience and one shameful picture that now is part of the Pinteresting life of Gotha Stewart.

Follow The Pinteresting Life of Gotha Stewart on WordPress.com
Join 2,387 other subscribers